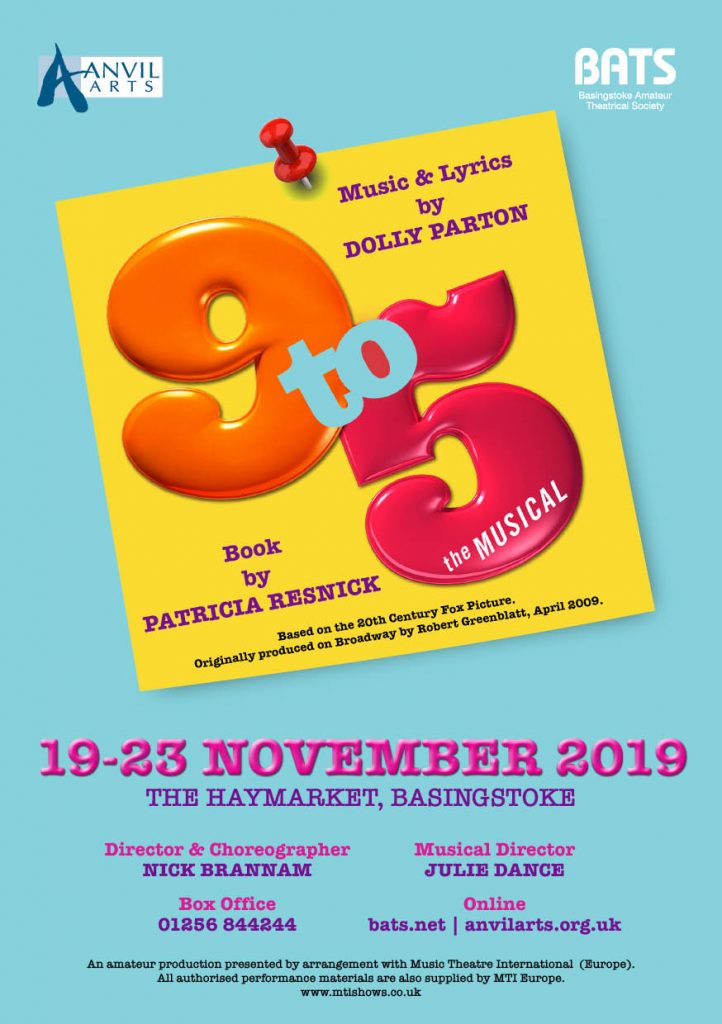 Music and Lyrics by
DOLLY PARTON

Based on the 20th Century Fox Picture.
Originally produced on Broadway by Robert Greenblatt, April 2009.

9 TO 5 THE MUSICAL
An amateur production presented with Music Theatre International (Europe)
All authorised performance materials are also supplied by MTI Europe
www.MTIShows.co.uk

9 to 5 is based on the 1980 movie of the same name, and features music and lyrics by Dolly Parton.

It centres on the downtrodden working lives of three women, Violet, Judy, and Doralee. They all work at Consolidated Industries, which is presided over by the sexist, lecherous, and pompous, Franklin Hart.

Violet has worked at Consolidated for many years, but has never been given the chance to rise above senior supervisor status, although she is capable of much more. Judy is newly separated and joins the company having never worked before. Doralee is a sexy, happily married country girl, but she is ostracized from the other female workers.

After Judy has an awful first day, Hart passes Violet over for another promotion, and Doralee finds out that Hart has been telling everyone they are having an affair, the three women unite in their hatred of Hart. Over a joint, they fantasize about how they would kill him. When Violet almost unwittingly poisons Hart the next day, he blackmails the three women, threatening them with the police. Doralee ties Hart up with the phone wires and, feeling empowered, they decide to imprison him in his own house while his wife is away.

In Hart’s absence, Violet, Judy, and Doralee run the office to great effect. They introduce childcare, hour-long lunch breaks, rehab programs, and much more to benefit the staff at Consolidated. While Hart is tied up, the women also use the time to gather evidence that Hart has been embezzling from the company, but Hart breaks free and surprises the women at the office.

However, his attempts to reveal the truth about his kidnapping are foiled when the Chairman of the Board arrives to praise the company’s increased productivity. The Chairman sends Hart to head up the Bolivia office and promotes Violet to the first female CEO. With Hart gone, the company reprise 9 to 5, in the happy knowledge that times have changed for the better.

Assistant to the Director
JUDE IFOULD

“The choreography by Nick Brannam, who also directed, was imaginative and well-executed.”

“the choreography and set design is always something to behold...”